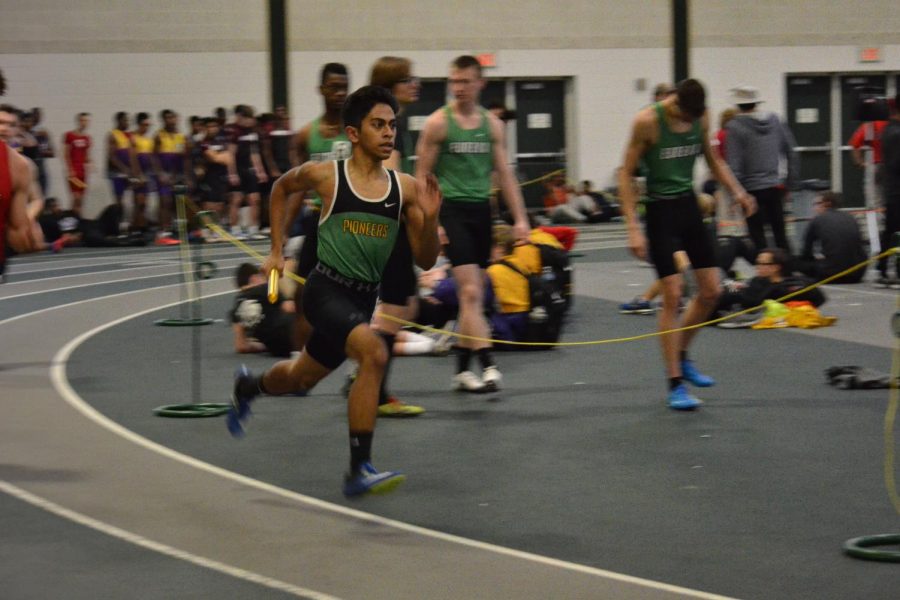 Making school history last season by becoming state champions, this team still hasn’t taken their eye off the prize. If anything, it’s making them work harder.

“It gives us a new kind of motivation,” senior Mason Runkel said. “It will help push us harder and to keep being that state winning team.”

A state winning team is definitely a possibility, as they are entering yet another season with a very strong lineup. Senior Carter Burk is returning this season, fresh off a state championship win last year in doubles. Since Burk’s doubles partner Josh Friesen graduated last year, this has created a spot for the team to fill.

“We have two solid freshmen coming in,” senior Dorath Chamarthi said. “That will help the team.”

Helping the team this season will also be numerous state qualifiers. Chamarthi and junior Vishnu Anagani will return with state singles experience, while the doubles duo of seniors Mason Runkel and Thomas Moh will add to that as well.

These seniors will also be expected to take on more leadership roles.“It’s important for us to show the freshmen what high school season is about,” Runkel said.

After winning state the recognition of the tennis program has increased. This creates new opportunities for competition, including new tournaments. One of these tournaments goes by the name “mini-state.”

“At this tournament you see the best teams in the state,” Runkel said. “It prepares the team for what we need to work on and the level of competition we will see.”

As for strong competition, the team is looking to bring it to the court. Chamarthi said this team has one goal: “back to back state champs.”

“Placing well at state definitely sets the bar high,” senior Nathan Clay said. “A season like that lets us know what we’re capable of achieving.”

Nathan Clay is one of three returning members of the 4×800 state champion relay. After graduating key contributors last year, the team will be forming a new lineup. They will be looking for more underclassmen to fill those spots.

“We had some great seniors last year,” Clay said. “This year some up and coming underclassmen will make a difference.”

However, that will not be the only change coming to Boys’ Track & Field this year.

“We’re moving up to 3A, with schools like Normal Community and Bloomington,” junior Joe Brown said. “There will be more pressure with being moved up a class.”

Joe Brown is looking to qualify for state in the 400 meter dash, and is ready for the new competition the change will bring.

Despite this new class change, the team is staying positive, hoping for another conference win and a run for more state qualifications.

“At our first meeting Hampton gave an inspirational speech, saying he believes in our team,” Brown said. “He believes we can make it to state again.”

“Everyone is always super excited for intercity,” senior Olivia Shouse said. “We’ve won the last three and it would be great to continue that.”

In order to get there, however, the team will need to train a new lineup and fill vacant spots, specifically some of the speed events.

“Last season we graduated a lot of senior sprinters,” junior Rachel Kullman said. “But as we fill those spots our team we will relatively be the same.”

The team is looking to have multiple potential state qualifiers. Returning senior Jessica McDowell is a front runner in the sprint events this year, along with sophomore Ella Bittner in the distance events. Another highly anticipated event to watch will be the 4×400, a relay that captured a fifth place state finish last year.

The team is excited for this new season and the number of people they have joining.

“We are looking forward to seeing what the incoming freshman can do,” Shouse said.

Although this team may have members of all experience levels, they are still working with the same motto.

“On this team,” Kullman said, “We aim to help each other reach our goals.”

In 2018, the softball program made history by becoming both sectional and regional champions. Their success continued as they qualified for the Super Sectional.

“Our success last season is something I will never forget,” senior Lana Williams said. “It showed a lot of us what we are capable of doing when we work hard and play our best.”

In order to play their best this season, the team is spending spring break in Cocoa Beach, Florida. This trip will allow them to bond as a team and experience new tournament competition, including schools from Tennessee and Louisiana.

Team bonding will be especially important with twelve freshmen joining the roster.

“We have to fill those four starter spots (left by graduated seniors)” junior Maddie Roop said. “We’ll begin to see more juniors step up and take those roles.”

The juniors are ready to play, however, as many have experienced last year’s postseason success.

“Last year’s season brings us confidence,” Roop said. “We hope to take that and make it just as far this season, maybe even making state.”

Ending last year’s season with a tough regional lost has given the baseball team the drive to bounce back.

“Last year we felt that early postseason dismissal,” senior Parker Mathieson said. “Having felt that last season, this year we are more ready to reach our goals.”

All team members are on board, with many having been a part of last year’s roster.

“We only lost four seniors last year,” Mathieson said. “We’re all coming back from having played a season together, creating a good group of guys who are super close.”

This experience will be a success factor, creating a group who’s prepared and ready for this new season.

“We have a lot of talent on all levels,” senior Paul Africano said. “We’re a really talented team this year.”

Taking their talent to Florida over spring break, the team plans to get ready to reach multiple goals for this season. The team’s goals include winning the CS8 title and continuing into a long postseason. One tool for this success will be having a strong group dynamic, an element that has already made it’s appearance this season.

“We’re a more tightly knit group,” Africano said. “Being a younger and more energetic group will help us in the dugout when we’re down.”

With a strong group of senior leaders, a motivated team, and plenty of talent across the board, it seems that baseball is ready to meet their biggest goal this season.

“State,” said Africano. “That is definitely the goal and this year we have the potential to reach it.”

Ending last season in a tough battle for both the intercity and regional titles, this year’s team is ready for the challenge.

Before reaching intercity, the team plans on finishing one important task.

“This year we have a pretty young team,” senior Toni Poland said. “Even with lots of talented freshmen coming in, we still lost ten seniors.”

At this point in the season, getting ready means the senior captains are setting new goals and incorporating team bonding and harder practices.

Relying solely on freshmen will not be necessary this season, as the team is welcoming back many experienced upperclassmen. With the combination of both new talent and high school soccer experience the team is looking into the future with two main goals in sight: