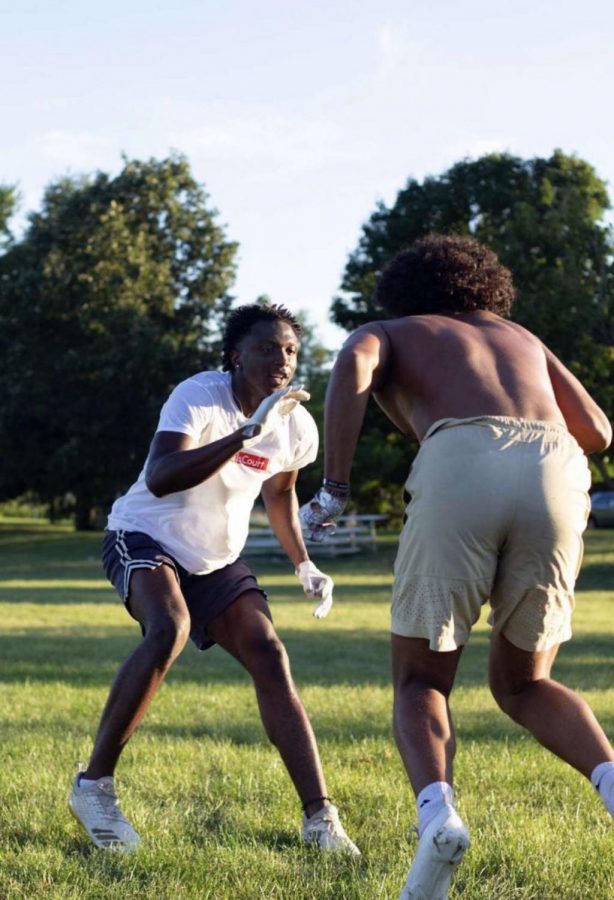 Justin Johnson (left) working on drills to stay ready for the season at North Point field, a local park.

Life looks a little different right now for athletes whose sports are modified, paused, and cancelled while school still carries on.

Senior Justin Johnson said he is dealing with frustration at his season being cut short due to the global pandemic.

“It’s [COVID-19] just frustrating that it’s taking over our season and limiting us so much,” Johnson said.

Johnson said he is also working to set a standard for himself regarding his school work in the constant change of this school year.

“I make sure I turn in my work on time and hold myself accountable,” Johnson said.

Unlike some sports, girls soccer has not had the same level of shutdown with some summer club teams running.  These summer opportunities, however, haven’t prevented junior Annabelle Baybordi from worrying about her school season.

In this state of reduced face-to-face contact, Baybordi said she and her teammates have turned to social media to stay connected.

“I snap most of my teammates a lot,” Baybordi said. “And our team has a GroupMe chat that we can all communicate to the coaches with that we use a lot.”

Balancing school work and soccer can be overwhelming at times.

“Yes it can be overwhelming when I get assigned lots of homework and still have to go to practice but it just depends on the night and how much work I get.”

Season cancellations have affected some players more than others. Senior baseball player Karson Bonapartes said he is worried but also  relieved because he has already committed to play at a college.

“Having our season cancelled will be really tough on all of us (coaches and players),” Bonaparte said. “But knowing that I have committed to Notre Dame [is something] that I can fall back on. But some others don’t have that chance and it could feel like all work you’ve done just goes to nothing.”

Although Bonaparte has committed, slacking off is not an option for him.

“I have to have certain grades to fit my college coaches’ standards, so I can’t slack at all even though we aren’t in season right now,” Bonaparte said.

Senior Brandon Merritt said he is learning to deal with the constantly changing information.

“At the end of the day, it is what it is,” Merrit said. “I would love to play my senior season, but if our season does get cancelled that’s what it is.”

Merrit said he keeps listening to music and hanging with friends to try to take his mind off all of the worrying about how it is  impacting his recruiting season.

“Yea I haven’t been able to play in front of the coaches that want to see me play during the summer and my senior season,” Merrit said. “So sending out film to schools like South Nazarene, Kentucky State, and others. is really the only way I can push recruitment.”