Masks up, game’s on 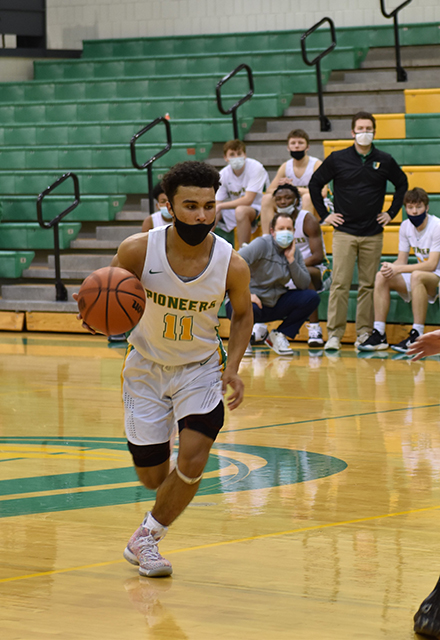 In an early game against Central Catholic, senior David Starr looks for an opening.

With the introduction of social distancing, sport teams around the world had to change how they practiced and played to ensure player safety. Though practice and games stopped, athletes did not.

Now, it is 2021, a year into the global pandemic, and sports are making a comeback, including cheerleading. However, contact within these sports looks very different in order to account for social distancing.

“We can’t stunt. We can’t touch each other. It’s just jumps, tumbling, and dance,” Weldy said. “We’re still happy we can compete, but we’d rather be stunting because it’s more fun and inclusive of all the girls.”

Cheer competitions are starting up, but are taking place online.

Weldy said she feels fortunate that they get to return to cheer, even though things look quite different than last year.

Junior David Starr plays varsity basketball said there have been many challenges, but he has managed to stay on the court. Starr has continued practicing with his Amateur Athletic Union (AAU) team in addition to getting shots in at the gym.

Starr said his main worry has been the uncertainty around whether they would have a season.

“(I’ve) just worried if we’re gonna have a season or not,” Starr said. “This is the seniors last chance to get on the court and play, and even get looked at by schools.”

Rules have gotten more complex for sports these days now that social distancing is in order. For boy’s basketball this means masks on while playing, fewer fans or none at all, and even the jump ball that opens the game has been removed. The away team starts with possession of the ball.

Starr said the absence of fans is noticeable.

“With the audience there’s definitely more energy and it gives you that adrenaline rush, “Starr said. “Without the crowd it’s really quiet in the gym. Our team just has to get the energy going ourselves.”

The team has clearly had no trouble motivating themselves as they are 8-4 this season.

Head girls soccer coach Hayley Sefton has an optimistic attitude towards the season ahead of her. The game itself has not changed but the way in which they prepare has.

There are many COVID precautions that go into place when planning a game or a practice.

“I have to take temperatures every time I see the girls and they have to fill out forms for every season,” Sefton said.

This soccer season there are three seasons: winter, spring, and summer. The summer season will continue through most of June.

”There’s a lot of paperwork now. I feel like we’re killing a lot of trees,” Sefton said with a laugh. “But if it gets them here then it’s worth it.”

Sefton said she has missed coaching the girls since they didn’t get to have a season last year. The team had trained all spring to have a season and then when the global pandemic shut the world down, it also shut down soccer.

“We went from practicing for two weeks to the day before our first game was shut down. It wasn’t a final shut down then either, they strung it along,” Sefton said. “So everyone kept running and staying in shape, hoping we’d play again. We were the best in shape team for nothing.”

The training will not be “for nothing” this year, as the team returns to the field April 5.