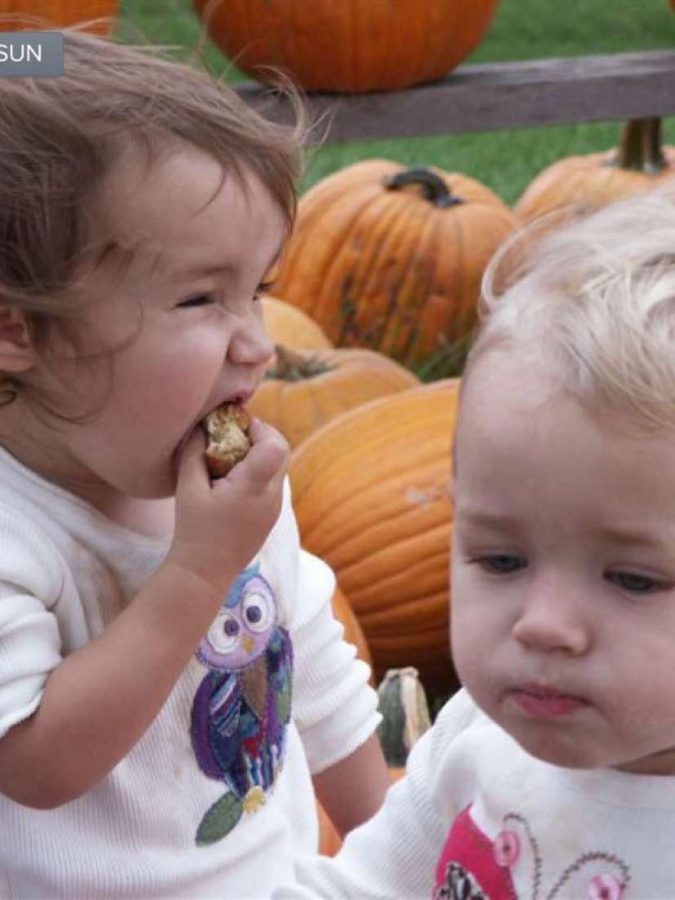 The following is an interview with Lauren and Sydney Casey, fraternal twins who attend U-High. Both are section leaders in low brass and participate in several clubs.  Sydney is also the president of Amnesty International. This is the first in a series of interviews that will introduce the many twins populating the halls of U-High this school year.
Q: What’s the best part about being a twin?
Lauren: She’s going to say stealing my clothes.

Sydney: Well, yes, stealing her clothes, but also, having somebody to be by your side with everything that you do. You’re never alone.

Lauren: Right, we’re kind of forced to be friends. We spend so much time with each other that if we didn’t get along, our lives would probably be miserable. So it’s a good thing that we do get along.

Sydney: Most of the time.

Lauren: I have her to help me with stuff that I might not be so good at.

Sydney chuckles as she says this
Q: What are some similarities between the two of you?
Sydney: There’s not a lot. We’re very different people

Lauren: I mean, our interests are kind of similar. Obviously through the clubs and stuff. We’re both pretty invested in band. But no really different, we spend our time doing very different things and we’re just really different people.

Sydney: I feel like we’re like-minded but we present ourselves in different ways.

Both are sitting, left arm over right, slumped back in the chair, legs crossed.

Sydney switches positions so her arms and legs are no longer crossed. However, she is still slumped in the chair.
Q: What are some differences between you two?
Lauren: I think I’m more into artsy things, I would say, I draw and I do makeup and… Just that kind of stuff. I make jewelry….

Lauren: Yeah. I play a lot of video games and Sydney’s very school-oriented from a lot of things that I’ve seen. I don’t know.

Sydney: Wow, you don’t know me. I’m more school-oriented, I don’t know how to say it nicely.

Lauren: You do math for fun.

Sydney: I do math for fun.

Lauren: Is that all you do is math?

Lauren: She doesn’t have a life.
Q: Who is considered the bossy twin?
Sydney chuckles and the room falls silent for several seconds.

Lauren: Yeah. It’s okay. You can say it.

Lauren: Yeah. Cause I’d  say I’m not necessarily bossy unless I have a reason to be bossy, but…

Sydney: You are more outspoken. I don’t want to say you have a temper, but…

Lauren: It’s okay you can leave it at “outspoken”

Sydney: Yeah, you’re outspoken. Now, as far as leadership… That’s me.
Q: What is your favorite twin memory?
Lauren: I don’t remember anything. I wouldn’t say there are any twin memories. She was just there, you know? That sounded so mean. I have memories, but they don’t really feel like I can classify them as twin memories. I do something and you’re usually there. So most of my memories are twin memories. Do you know what I mean?

Adam: Let me rephrase it, What is your favorite memory with a special connection between you and your twin.

Lauren: Oh, I remember. Okay. There was one time… me and Sydney never hug or anything. Do you remember?

Sydney: I was thinking of that same exact thing!

Both of them bubble over with excitement.

Sydney: We were five or six or something-

Sydney: It was you

Lauren: But I just went up and hugged her and that was probably the only time that I’ve ever hugged her or anything.

Sydney: Yeah I can’t believe you remembered that! I think about that all the time.

Lauren: Aww, she loves me.