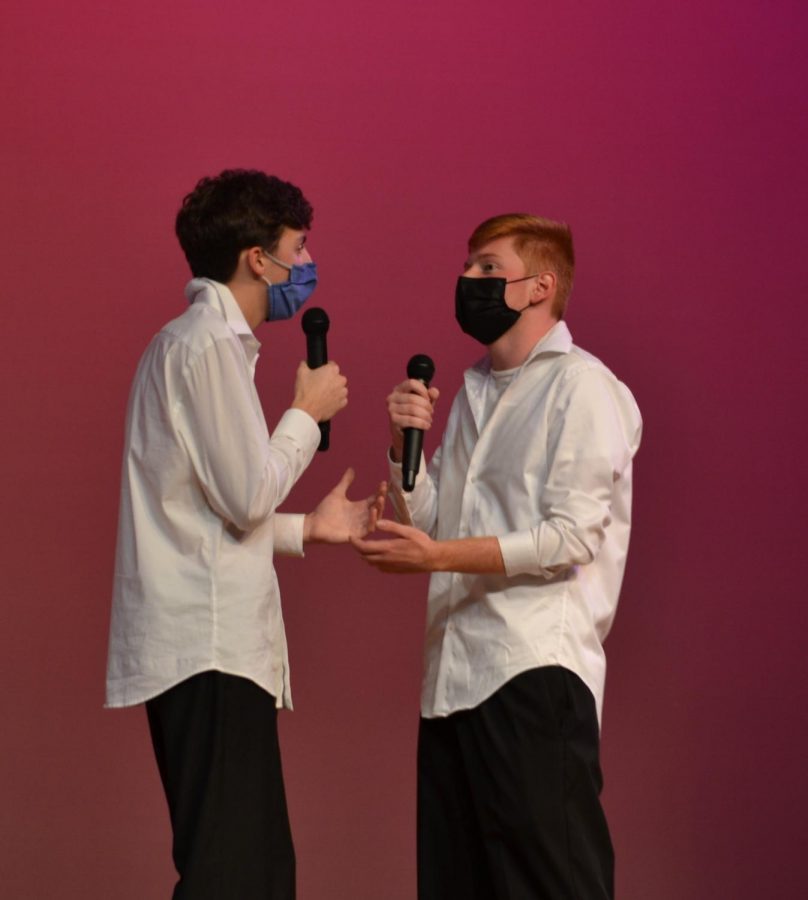 “We're soarin', flyin', there's not a star in heaven that we can't reach,” Andrew Munn sang to Alex Redell. The two teamed up to sing High School Musical’s “Breaking Free,” much to the crowd’s joy.

It’s been two years since the last in-person Mr. U-High and this year’s contestants delivered spirit in the form of sensational dancing and magic tricks.

Despite popular belief, contestants were not directly restricted on anything they wore.

“We were limited in what we could say and what we could do during the dance, [however] we did not really come close to crossing any of those boundaries,” contestant Ian Kelly said.

When the Talent portion of the show arrived picking a favorite prove nearly impossible for the judges.

Starting off the show, Konnor Bouman charmed the audience with his “infinite tissue” trick, but after smelling, hands and making cards appear in pockets, Bouman left the crowd in fits of laughter. Following such magic can be difficult, but as Hunter Otto pranced across the stage he pulled in at least a few judge’s votes. His pink tutu and black leotard glowed in the lights of Stroud. Pirouettes, jetes, and splits, Otto aced his recital.

Dylan Eble came out on stage with a pogo-stick and recorder.  For Eble, this was the most challenging portion of the show.

“The hardest part was trying not to fall,” Eble said. “The only way I can do it [Pogo stick] with no hands is if the bar of the pogo stick is on my waist and as I’m getting taller my pogo stick is not reaching my waist.”

His hard work was appreciated by the crowd as screams and cheers echoed off the walls of Stroud.

As the night came to a close, a presentation dedicated to Troy Griffin Hari played. Hari was a 16-year-old U-High student who lost his life in an automobile accident in 2002. Mr. U-High was founded in his memory in order to raise money for U-Build, an organization that works to provide housing in Haiti.

For the finale, the contestants lined up before the judges as the winner was announced:

“And this year’s Mr. U-High is… Dylan Eble!” announced Emmy Story as the crowd began to cheer for the new champion.