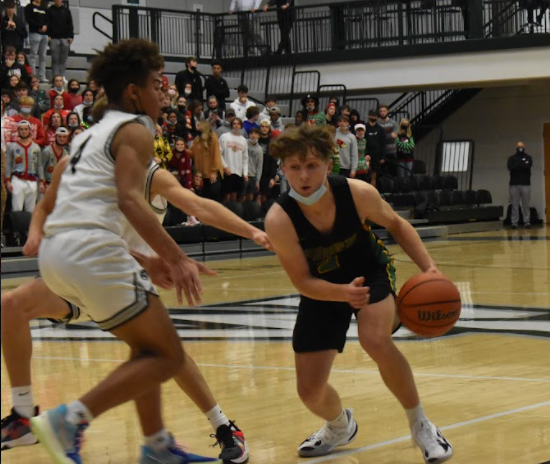 Pictured above is Oliver Cade

As the winter months come upon us, so do the sports seasons that come with it. Yet again, the Pioneers are working hard to gear up for some competitive sports seasons.

Boys Basketball is underway, with their next game taking place on Saturday, December 4. Led by coach Andrew McDowell, the team will rely on their teamwork and defensive toughness to guide them through the season. The season promises to hold some tough matchups with teams such as Decatur MacArthur, Springfield Lamphier, and Sacred Heart-Griffin all bringing on their tough, physical defense and fast-paced offenses. All three teams are projected to be at the top of the conference this year.

“I think there’s a lot of opportunity for guys to show how they’ve been working in the off-season,“ McDowell said. “So I am just excited to see everybody this year. It’s a small team, so everyone is going to have to help carry the weight of the team.” The roster consists of 11 players this year, down from 14 last year.

Girls Basketball opened the season with a loss in their intercity match-up at Bloomington High School, concluding Intercity 1-3. With seven seniors on deck, this team brings a lot of experience to this season. With some quality CS8 teams in the schedule up ahead such as Rochester and MacArthur, it will be exciting to see how these players perform.

“If everyone comes together to accept their role on the team and buys into what we want to collectively accomplish, that success will happen,” Sellers said. “Expectations here are high, around here everything seems to be a high level of success, so we just want to match that high level of success.”

Moving away from the hardwood and into the pool, coach Colin Gunst is assisting the team this season.

“We have a great group, ready to do great things, and we would love the opportunity to show that to the Pioneer community,” Gunst said. “These swimmers work incredibly hard to make things happen, and they are a great group of people outside of the pool too.”

The boys swim team will have to pit themselves against some bigger schools this year; their first meet is December 7 against Champaign Central High School. With bigger teams like this and more ahead on their schedule, the team will have to make up for their lack of depth in contrast to these schools. With high expectations at the state meet this season, overcoming these large schools will be their first step to victory.

Now onto the mat: senior Hunter Otto looks to lead a relatively young varsity wrestling team to victory throughout the winter season. While the team does lack experience at the varsity level, qualities such as siblinghood, respectfulness, and a positive attitude are what Otto thinks will help lead the team. With teams like Glenwood and Jacksonville in the CS8 conference, the team will have to work hard in order to contend and bring up their young talent. Even if they may be small in numbers, there are 10 wrestlers on the team, only nine of whom are able to wrestle this year, their extreme work ethic and intense practice regimens will lead them to success this season.

“While the wrestling team is small, it actually may help us in certain ways. Every wrestler can form a close bond with one another as well as with our coach,” Otto said. “This creates a huge support system where we all work our hardest to make ourselves and others improve.”

“One thing people should know is that even though the competition will be fierce this year, we will always show up no matter what,” varsity cheerleader Makayla Tupper said.

The U-High winter sports season is in gear and with the crowds back in the stands this year, the Pioneers want your support at all of their events.

“We’re ready to go and we need U-Crew there to support us every step of the way,” McDowell said.